Behind the Lens: Snake Charmer

First of many posts in a new series that will take you into the studio with me as we explore and learn different techniques from set, to light, to post production. 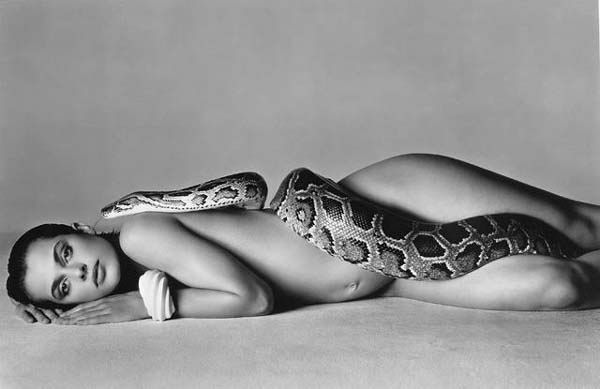 I spent a lot of time researching “model + snake” photos on the internet – everyone knows that famous Avedon photo of Nastassja Kinski, right? I wasn’t sure quite what to expect once I arrived at Creative Image Studios – a large studio/workshop shape out in my east end neighbourhood. Run by Kevin Lee, it was well organized considering you had 30 photographers on site shooting in two 3-hour shifts, 2 models, 2 ornery snakes, 3 helpers, and 2 completely differently lighting setups. I can imagine the organizational nightmare this must have been.

Every workshop that I’ve been to until this one used strobe lighting so this was a new experience for me. I understand why the lighting was done in this way – by setting up the light to be continuous, it allows for more than one photographer to shoot at a time as no single photographer is controlling and setting off a flash. All photographers participating can use the same settings (if they wish) to get the same results.

For this set the larger boa was used – about as long as I am tall – to allow for body wrapping, full length body elongation, and all sorts of great curls and manipulations of such a long and flexible animal. Our model Vanessa, a last minute stand-in for the original who cancelled via email the night before, had some scale-like makeup applied to her face but not as effectively as in the sample photos provided – a little too smudgy as it applied with eye shadow – and too little to be truly effective.

I enjoyed shooting with this unique light and luckily, having gained a lot of experience shooting with a crowd through the Keyhole Sessions‘ Girls on Film photo shoots, manoeuvering through the group to get a good shot was a piece of cake.

A small area was set aside for close-up head shots with model Sharon and the small boa. With the use of a white reflective table you could easily get clean portraits with or without reflections. There was not a lot of room for movement in the confined space so you had to get creative with either the snake’s position or Sharon’s facial expressions.

As with Vanessa, some scale-like makeup had been applied to her face, but so little and smudged in a way that it looked like a bruise on her forehead. It should either have been reapplied or removed altogether.

I’m not sure what I thought working with snakes would be like, but here are the lessons that I learned coming out of this workshop:

Some shots from the shoot (click for larger size):

A moxie of a shoot with Larissa

ometimes everything just clicks in place. That’s what happened when I got together with the …

any moons ago, I had the opportunity to volunteer my creative skills with Pride Toronto’s …